At present, Peier membrane industry company is becoming the pioneer of membrane

Date:2021-06-27
Reading guide
The experience of Israel, Singapore, Australia and other countries shows that the utilization of sewage resources is an important way to solve the shortage of water resources. China's per capita water resources are only one quarter of the world average level, and China faces the prominent problem of moderate water shortage all the year round. On the contrary, the development of sewage recycling market is slow, and the utilization rate of reclaimed water resources increased by less than 2% from 2011 to 2016, The utilization rate of reclaimed water required by the 13th five year plan has not been fully achieved.
Outlook & ldquo; Fourteenth five year plan;, Driven by demand and favorable policies, the development of China's sewage recycling market is expected to accelerate, with an annual compound growth rate of 13.68%, and the market scale will exceed 60 billion in 2025. Chen Yu believes that it is not easy to do a good job in sewage recycling business. Enterprises entering the bureau need to grasp three key points:
•         Target project type
•         Select partners
•         Straighten out the business model

Under the dual forces of demand and favorable policies, the sewage recycling market is expected to speed up

Globally, the sewage recycling industry in water deficient countries such as Israel has developed well, and the utilization rate of sewage recycling is as high as 90%. As a country with water shortage, China's sewage recycling industry has not developed smoothly. Until 2019, the sewage recycling rate was only 20.93%, and the increase ratio from 2011 to 2016 was even less than 2%. The main reason is that in the face of the dilemma of water shortage, the Chinese government paid more attention to inter basin water transfer and set a red line for water consumption: launched in the 1980s & ldquo; South to North Water Transfer & rdquo; Major projects will transfer 44.8 billion cubic meters of water through three water transfer routes from the East, the middle and the West; The water consumption for agriculture has been stabilized and industrial water has been reduced for many years. The water consumption has been controlled within 600 billion cubic meters from 2010 to 2019./p>

Outlook & ldquo; Fourteenth five year plan;, Under the dual forces of demand and favorable policies, China's sewage recycling industry has ushered in a turnaround:
First, the South-to-North Water Transfer exceeded the planning and water control reached the platform period, and the demand for sewage recycling was released. As of 2018, the water transfer from the middle line has exceeded 15.5 billion cubic meters, the water transfer from Beijing to Tianjin has exceeded the planning, and new solutions have been put on the agenda; In terms of water use control, all subdivided fields have reached the platform stage, and there is little space for water saving in the future. Taking agricultural water as an example, its water consumption has basically remained unchanged in recent ten years, about 370 billion cubic meters. In order to ensure food security, the comprehensive grain production capacity needs to be maintained at more than 1.3 trillion kg, and the corresponding irrigation water demand should reach at least 370 billion cubic meters. 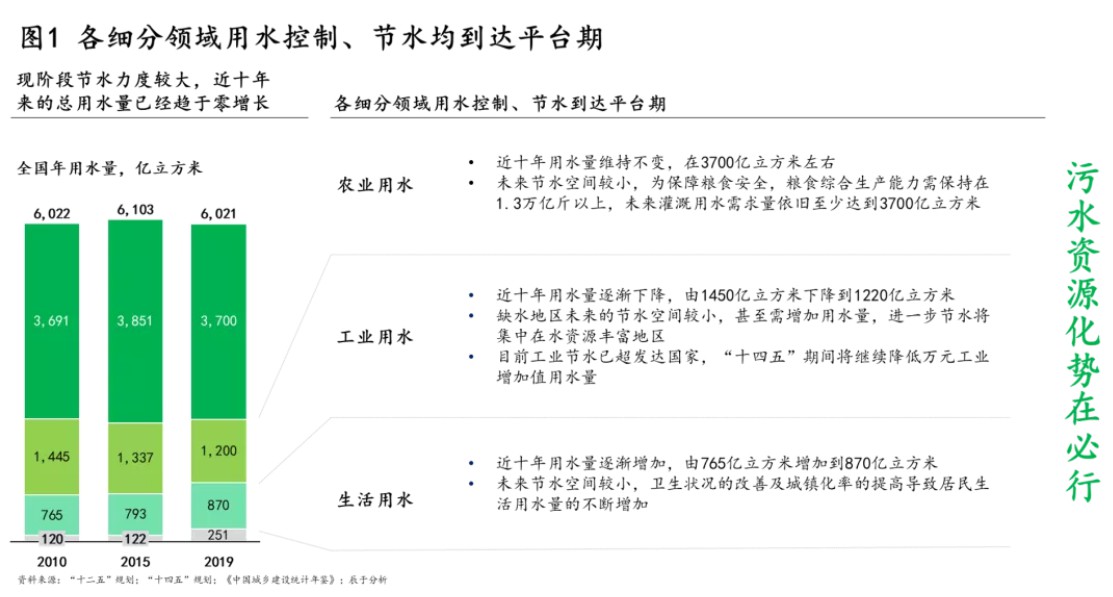 Second, policies with strong operability were introduced intensively. Since 2020, the guiding opinions on promoting the utilization of sewage resources and & ldquo; Fourteenth five year plan; Heavy policies such as the development plan for urban sewage treatment and resource utilization, which require more feasible objectives, such as compared with & ldquo; The 13th five year plan; The target of renewable water utilization rate of water deficient cities and non water deficient cities is also mentioned in the plan. This plan is mainly focused on water deficient cities, which is more targeted; The supporting system supporting the policies is also more sound. Recently, these policies have clearly put forward supporting systems including laws and regulations, price mechanism, financial funds, scientific and technological support, so as to ensure the development of sewage recycling market. 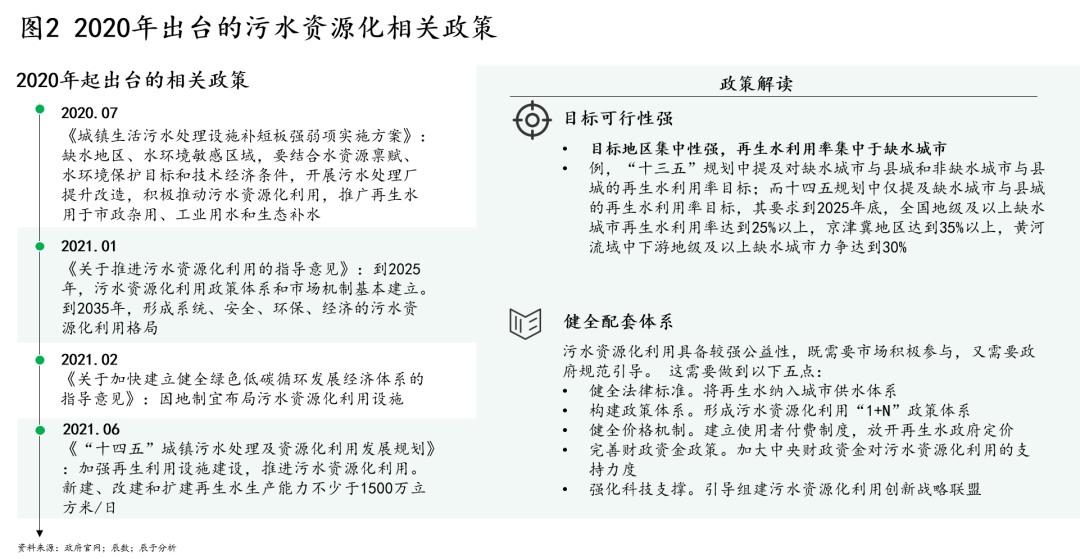